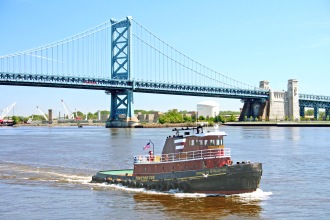 “Piers” is probably not the correct name, but I mean those two rectangular structures on either side of the bridge—four all together.

The two on the Camden side show nicely on the photo at left.

They look like they are anchors for the suspension cables, but that is only partially true. We have to back up a little.

Trains connecting Philadelphia and Camden run along both sides of the bridge. The tracks are below the road surface, so you may not have seen them as you drive across. I call them “trains,” but that’s not quite true, either. To me, a train has a separate engine pulling the cars.  The bridge trains are the same  subway cars as on the Philadelphia side where the driver sits at the front of the first car in a separate compartment from the passengers. (I like the driver sitting up front where I can watch him and he knows many of us are watching him. I have never seen a woman subway driver.)

The “piers,” as I call them, were originally built as train stations (Whoa!). They expected people  would enter at the base of the pier, take an elevator up to the track level, ride the train across to the other side, then take another elevator down again: all very modern thinking at the time.

But the piers were never used.  The areas around the bases of the bridge remained deserted on both sides. Still are. Only daily commuters from downtown Philadelphia thought of taking a train across.

But the legacy lives on. You can ride the Frankford subway from center-city to the PATCO (Port Authority Transportation Corporation) station at 8th Street, and switch there to the PATCO line. The PATCO line continues on over the bridge to the Camden City Hall, then on to Lindenwold, passing through other locations that are well-known bedroom communities for Philadelphians.

There are also very nice wide walkways on either side of the bridge roadway. The derelicts have left, and the walkways are now used by yuppie runners. I can’t imagine a better place to run. Even the slope is perfect: uphill when you are starting out and fresh, downhill when you are tiring.

You can cross the bridge in many ways: drive, walk, bicycle, or by the train.  Only in-line skates and skateboards are specifically prohibited.

When I was on the bridge years ago, taking photos right-and-left, a policeman approached and said apologetically I was not allowed to take them. That was the height of the terrorism threat, but we both knew the law was ridiculous. Any terrorist could download as many photos of the bridge as they wanted from the Internet. We also knew I would resume taking photos as soon as he was out of sight. But he was only doing his job, so I didn’t argue. 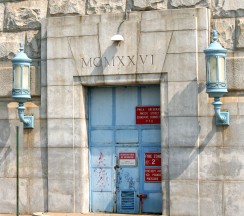 You can still see the doors for the planned elevators at the base of each pier. (I expect the heavy bronze light fixtures to be stolen any day for their metal value.)

(PATCO also has a photo-id system for riding their trains in New Jersey as SEPTA is starting. I once got such a card at the Camden City Hall for $5, but never used it, and it expired. I had enough to do just exploring Philly, but I can’t pass up a bargain.)

My reasons for writing this blog are spelled out in the posting of 10/1/2012, Montaigne's Essays. They are probably not what you think.
View all posts by Roger Walck →
This entry was posted in Philadelphia. Bookmark the permalink.