The Basement of the Peirce–du Pont House at Longwood Gardens

The older part of the basement (the south end) is a warren of small rooms that were built originally in 1730, or added over the many years since. The rooms join each other seemingly at random, so it is easy to get lost. (Many doorways, however, have the required emergency signs, “Not An Exit,” meaning they are dead-ends. If you smell smoke, don’t run through this door hoping to escape.) One clue to your location is that every fireplace in the ground floor living space has an arched structure in the basement to support the weight, the same size as the fireplace above it. Big fireplaces have big supporting arches, small fireplaces, small arches.  The arches are solid with no flues. 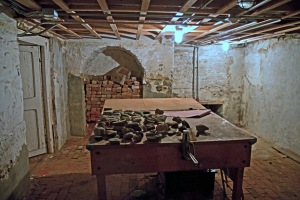 This photo is of a typical basement room. It also illustrates my speculation of why something was done and when. My speculation may be totally wrong, but it is fun to think about. Take my speculations as beginnings for your own.

One of the fireplace arches is in the back wall, now used to store salvaged bricks. It looks like the bottom four feet of the support (both sides, although you can only see one in the photo) was repaired by taking out the old bricks, replacing them with cement blocks. Nothing is thrown away, so the old bricks were stored within the arch. This was probably done in 1995 when the House was renovated for the Heritage Display, or perhaps later when the deterioration became critical. Before then, during the Peirce’s ownership, I would expect the bricks would have been used for something else. Something is in progress on the table, and it looks like the room once had a suspended ceiling, although I have no idea why.

However, the bricks look clean. I have to look at the room again, but the bricks could have come from the floor where they were laid without grout (only some rooms have brick floors). 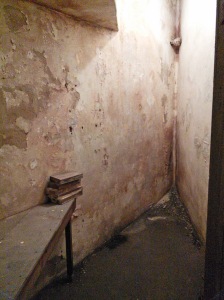 The rooms were often placed wherever they were needed, so this created strange corners as shown here. The basement once had a bowling alley under Pierre’s library with a glass-bottomed aquarium in the ceiling above the bowlers, so they could look up and see the fish. Later, during the 1950s, much of the basement, including the bowling alley, was gutted to make room for bomb shelters. Even the shelters are now gone. The basement once held the family records that Pierre had collected, but these were moved to the Hagley Museum Library years ago when space there became available.

There is an underground tunnel going from the house to the garage. Some say it was built as an escape route in case of fire. Perhaps. However, there are many doors to the outside much closer to the living quarters than the tunnel entrance, and it is hard to imagine anyone running past these to get to the tunnel that could be blocked or filled with smoke.

Pierre was concerned with the danger of fire, so he put the furnace in the garage and steam heat is piped over for the House. I suspect the plan was to put the kitchen there too, to keep the danger of fire and the cooking smells away from the House. The servants would then bring the cooked food to the pantry (close to the House-end of the tunnel) to be served. That would be typical of those days when it was designed, but perhaps it was never used after it was finished.  A tunnel to the garage could be handy for other uses. 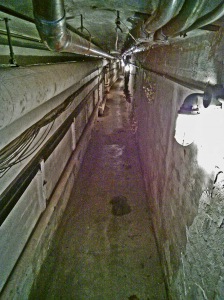 The tunnel (garage at the far end).

This is only my own speculation. Somebody must know all of the history for sure, and I would love to talk with that person. But the House is what it is. Perhaps I am better off with the fun of my guesses.

Women are like elephants. I like to look at them, but I wouldn’t want to own one.  —W.C. Fields

I feel the same about old houses (not women).

My reasons for writing this blog are spelled out in the posting of 10/1/2012, Montaigne's Essays. They are probably not what you think.
View all posts by Roger Walck →
This entry was posted in History, Longwood Gardens and tagged W. C. Fields. Bookmark the permalink.