I’m My Own Grandpa 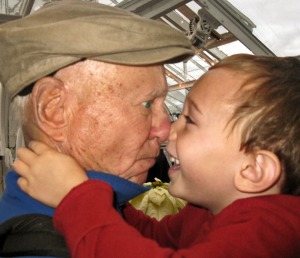 The discussion about designating cousins in the last blog reminded me of a song popular in the late 1940s, at least popular with one uncle at one family gathering I remember.  It was called “I’m My Own Grandpa,” and the words went like this:

I’m My Own Grandpa

Many, many years ago when I was 23
I was married to a widow who was pretty as could be.
This widow had a grown up daughter who had hair of red
My father fell in love with her and soon the two were wed.

This made my dad my son-in-law and changed my very life
For my daughter was my mother for she was my father’s wife.
To complicate the matter even though it brought me joy
I soon became the father of a bouncing baby boy.

My little baby then became a brother-in-law to Dad
And so became my uncle even though it made me sad.
For if he was my uncle then that also made him brother
Of the widow’s grown up daughter, who of course, was my grandmother.

Father’s wife then had a son who kept them on the run
And he became my grandson for he was my daughter’s son.
My wife is now my mother’s mother, and it makes me blue,
Because although she is my wife, she’s my grandmother, too.

If my wife is my grandmother then I am her grandchild
And every time I think of it, it nearly drives me wild.
For now I have become the strangest case you ever heard
As husband of my grandmother, I am my own grandpa!

(If you are trying to follow this, the important switch is in the first verse.  I understand it was Mark Twain who originally showed how someone could end up as their own grandfather.)