“Give me the child until he is seven and I will give you the man.”   -Jesuit motto 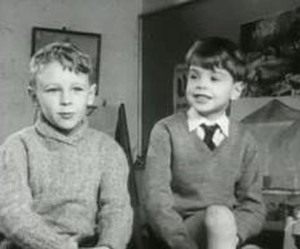 Two boys from “Seven Up!”

56 Up is the most recent of a series of documentaries that I saw on our PBS channel years ago and remains my all-time favorite.  The first, Seven Up!, brought together two groups of 7-year-old English children, one working class and the other upper class.  The cameras followed them around a playground watching them interact and asking them questions about their current lives and what they expected in the future.

“Do you have a girlfriend?” they asked several boys.  Their answers tumbled out in fits and starts.

Another said, “The girls never do what the boys want them.  They always start playing with dolls while the boys want to play rough-and-tumble with them.”

Another shyly said, “I don’t want to answer those sorts of questions.”

When asked about their future plans, one upper class boy told them exactly what schools he would attend on his way to becoming a barrister.  The answers of the working class children were a hodge-podge of vague dreams just as most of us had at that age.  On describing what they did after school, the upper class children were much more structured.  “When I go home, I have tea.  Then I practice my piano, then I practice my recorder, then I start watching television.  I have my bath at 6 o’clock and go to bed at 7 and read until half-past 7,” says one.

The same children from the original Seven Up! were interviewed again seven years later in 14 Up.  This was repeated every seven years, and now we have the recent release of 56 Up.  Together, they form a fascinating record of kids growing up with some expectations changing with maturity but their basic attitudes fixed for life.  A brash, working class boy grew up to be the most likeable of them all, a well-adjusted, level-headed taxi driver rather than the jockey he once wanted to be.  One boy developed mental problems and was homeless for a while (Neil, the cherub-faced boy on the right in the photo).  Some dropped out of the series unhappy with the publicity they received, but joined back in as they realized the importance of their participation.

The series is even more revealing than  An American Family, the 12-part PBS series that followed the family of Pat and Bill Loud in 1971.   (See the previous posting. I also stand corrected.  Seven Up! was done in 1964, so it was the first reality show, not An American Family that was aired in 1973.)  The Louds, living in Santa Barbara, good-looking, prosperous, seemingly had it all, but over the series we watched their marriage fall apart.  Even the word “Family”  in the title was cracked.

I understand 56 Up will soon be shown in American theaters, and, I hope, will eventually appear on PBS.  Google “7 up documentary” and you will find sources of clips from all of the series as well as the trailer for  56 Up.  The trailer explains it all.

The series was never planned to continue past the first; it developed a life of its own.  Roger Ebert said, “The Up series is on my list of the 10 greatest films of all time.”