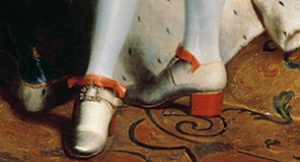 The BBC website has an interesting article on the origin of the high heel, how it started with men, and how they largely relinquished it to women’s fashion.

It seems the high heel started in 16th Century Persia as a very practical device to secure the foot in a stirrup while the cavalryman stood up to shoot his arrows.  Early in the 17th Century, all things Persian became the rage in Europe and the heel became a masculine symbol.  The heel was impractical for walking on the muddy city streets, but that made it even more desirable as a sign of great wealth, telling the world that the wearer never had to walk in muddy streets.  It became the fashion of royalty, notably worn by Louis XIV, who was short, and, later, by Charles II, who was not.  Louis XIV decreed that only members of his court could wear shoes with the heels and soles dyed red like his, and this became an easy way to identify VIPs.

In a few more years, the Age of Enlightenment abandoned status based on privilege.  In England, male aristocrats began to wear simplified clothes that were linked to their work managing country estates.  Men abandoned wearing of jewelry, bright colors—and heels.

Female desirability, in contrast, was increasingly expressed by irrational fashion, and the high heel became a primary example.  By 1740 men had stopped wearing them altogether.

High heels today are still somewhat unisex, but, as in the past, their forms have evolved to be very different.  In the American West, the heeled boot is still a practical way to keep the foot in the stirrup (or on a motorcycle peg), and continues to be considered masculine, even by city dwellers who have never ridden a horse.  The added extra inches of height on the wearer contributes to their appeal.   Women’s heels, on the other hand, have become even more impractical for walking, but they tighten the leg muscles and thrust the pelvis forward, all very feminine and sexy when combined with a short skirt.  Under slacks, they give the appearance of long legs, also considered feminine.  Their message?  “You should see what else I will do to be sexy.”